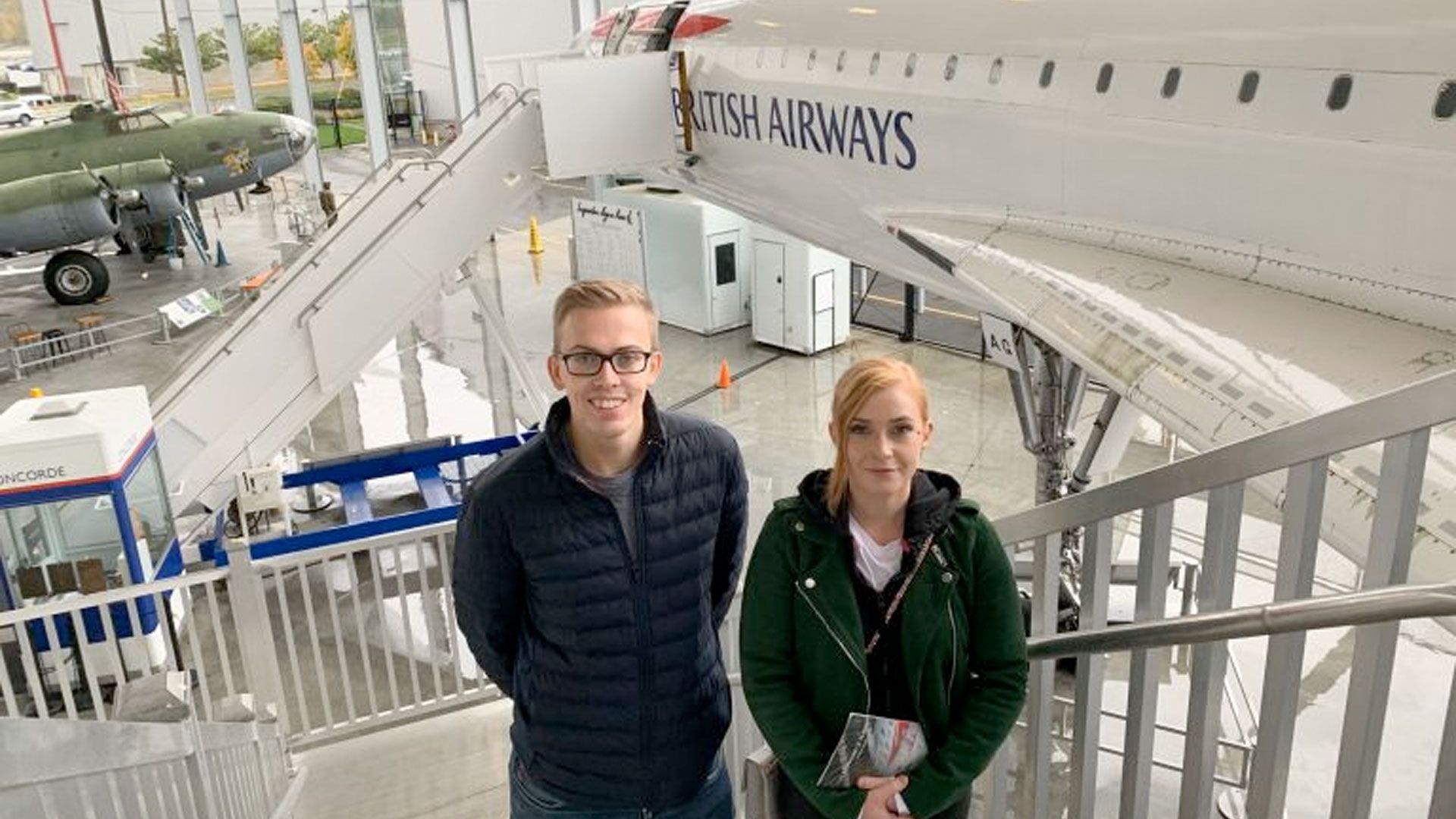 Two model apprentices, who won big at the University of Sheffield AMRC Training Centre’s annual awards, have returned from the trip of a lifetime touring Boeing’s state-of-the-art factories in Portland and Seattle.

Mary Stickland and Craig Horton, who are both from Rotherham, earned the opportunity to spend eight days in Oregon and Washington by winning the Siddall Achievement Award in March 2019.

The prize, which was new to the 2019 AMRC Training Centre Apprentice of the Year Awards ceremony, was donated by retired Silicon Valley CEO Graham Siddall. From Attercliffe, Graham was an apprentice himself and attributes the skills he learned as a young apprentice to laying the foundation for a successful career in precision engineering and semiconductor technology.

“As a former student apprentice, I have been enormously impressed with the AMRC Training Centre initiative and what it has given to the local community. I wanted to express my thanks and appreciation by giving the awardees a unique experience,” said Graham.

Nominations for the annual awards are made by employers and trainers to recognise the achievement or contribution apprentices have made to industry, and are judged by a panel of AMRC Training Centre staff and award sponsors.

“It was such a shock to win the award because I had no idea that I was even nominated,” said Mary, 22. “Graham stood in front of everyone, explained who he was and about his background, then he called my name out as one of the two winners.”

Craig, 24, said the evening then got even better: “We went up on stage to meet Graham where he told us he had made plans for this trip to Boeing.”

Mary and Craig, joined by Skills Manager at the AMRC Training Centre Gareth Wilkinson, began their trip at the Boeing factory in Renton, Washington where the 737 aeroplanes are built, followed by a tour of Boeing’s Composite Wing Center in Everett.

At the University of Washington campus in Seattle there were visits to the College of Engineering and The Boeing Advanced Research Center where the company’s instructors work with faculty and students on joint research projects.

It was the time spent at Boeing that sparked Mary’s imagination: “The factory tours were unbelievable, you can’t appreciate the size of the buildings until you are there and being driven around in a golf buggy.

“We were also shown Boeing’s Oregon Manufacturing Innovation Center (OMIC) Training Academy, which is based on the AMRC Training Centre, where they are trying to recreate the successful apprenticeship programme we have in Rotherham.

“You can read a lot about Boeing in a magazine, but there is no substitute for meeting people and actually seeing what happens. Graham didn’t just give us a tour, he took us for meals and introduced us to lots of people there, so it was a great opportunity.”

The week-long stay in the north west of the US concluded with a tour of the Boeing factory in Portland, Oregon by Global Program Manager Bill Gerry and then the chance to sit in a Concorde during a VIP tour of the Museum of Flight in Seattle.

“That was my favourite part of the trip. The number of planes they have on show there is amazing. As well as Concorde, we had a look around Air Force One and their space shuttle trainer; the thought of the people who had been on those planes is incredible,” said Craig.

Associate Dean at the University of Washington, Brian Fabien, said: “Our College of Engineering places high value on opportunities to study and research abroad, which prepares students for a global engineering career. We were delighted to be a small part of Mary and Craig’s exchange.”

Graham added: “It was such a fun week and as much a learning experience for myself and my wife Brenda as it was for our visitors. Mary and Craig were a little nervous at first but it was good to see them relaxing and growing in confidence as the week progressed.”

James Needham, senior operations manager at Boeing Sheffield, said having apprentices travel to the United States is an important part of their development.

“Taking UK apprentices to Boeing’s factories in the US to see where the parts they build will be used, builds connections, broadens horizons and makes a difference in how they approach what they do,” Needham said.

Craig, a Research and Development Engineer at Technicut in Sheffield, said he will use his experience in the US back home: “At Boeing’s Customer Engagement Centre I saw how they interact with customers on a more personal level by making their visit particular to each individual. Communication with customers is definitely my weak point so I will certainly take what I have learnt and apply it at Technicut.”

Jennie Mitchell, HR Manager at Technicut, said: “Through his learning and hard work at the AMRC Training Centre, from advanced apprenticeship to degree level study, Craig has become an excellent engineer.

“He is a great ambassador for Technicut and for our apprenticeship programme and as he continues to grow, he will be able to draw on his experience from his prize visit to the United States. He is testament to the value we place on apprentices and the key role they play in developing the future of our business together with our talented workforce.”

Mary started a Mechanical Maintenance Engineering apprenticeship in April 2018, working at Pryor in Sheffield. Simon Dunn, Operations Director at Pryor, said: “This award is testament to Mary’s dedication and how hard she has worked during her apprenticeship.

“I am really pleased with the success of Pryor apprentices which reflects not only the determination of the individual apprentices but also the dedication of the experienced Pryor team members who are mentoring and developing the skills of our future workforce.”

The 2020 AMRC Training Centre Apprentice of the Year Awards will be held on 20 March 2020, in the University of Sheffield’s Firth Hall.

Spotlight on apprentice success Read more
Back to News