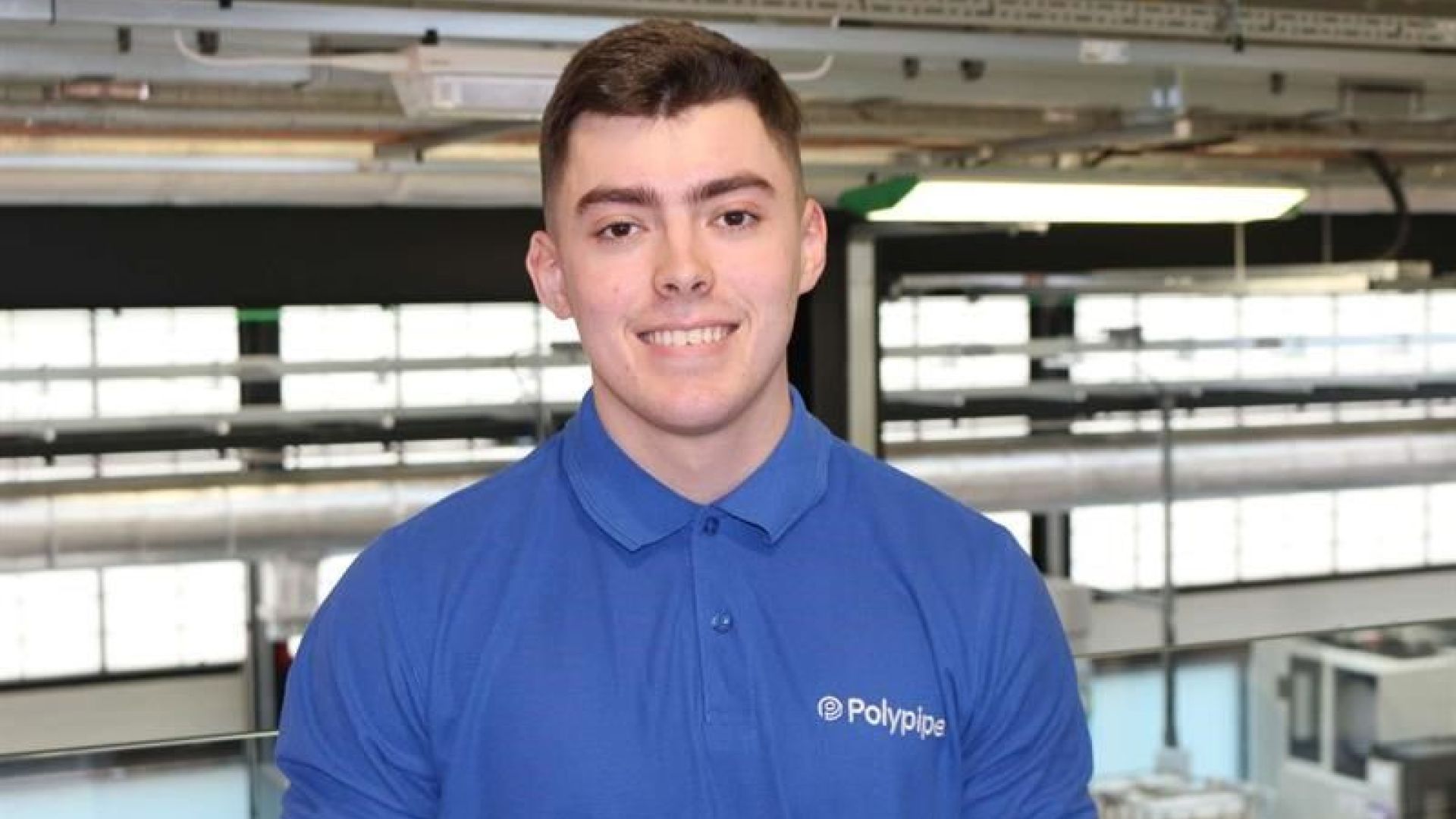 An apprentice toolmaker who designed and produced parts for an automated robotic system has saved his company £240,000 by keeping the work in house.

Jordan Clayton, 19, is a fourth-year apprentice with Mason Pinder Toolmakers, part of the Polypipe Group that manufacturers plastic piping and ventilation systems.

As an apprentice toolmaker, Clayton is responsible for the manufacturing, stripping and servicing of plastic injection mould tools, but his greatest achievement has been the modification of a robotic cell that inserts rubber seals into plastic moulded fittings.

Instead of paying the £300,000 quoted by an external company to produce the cell, Clayton and three of his colleagues were tasked with doing it themselves. They more than rose to the challenge, delivering the project for £60,000 – a fraction of the price quoted which ultimately saved the company £240,000. In addition, Clayton and the team also eliminated the need for the manual insertion of the seals, saving a further £40,000 each year.

Says Clayton: “I was required to design some of the system initially and once the final design had been assessed, I had to produce parts by machining, welding and sparking. Even as an apprentice, I have still played a large part in the success and development of the business. Being involved in the cell work led to new, innovative ways that processes are being carried out.”

Clayton started his learning with the University of Sheffield AMRC Training Centre in 2016, as a Level 3 Advanced Apprentice, and is now working towards his Level 4 HNC in engineering qualification.

Director of the AMRC Training Centre Nikki Jones says: “We’re incredibly proud of our talented apprentices and Jordan is a great example of the value their innovative thinking can bring to companies.

“Now, more than ever, building and maintaining skills within the workforce is an essential part of the mix if manufacturers are not only to recover from this pandemic but to be productive, resilient and regrow.

“Apprentices have a key role to play in that: they are tomorrow’s engineering innovators and the foundations of the future skills base.”

Clayton chose an apprenticeship for a number of reasons: not only does he like the fact he is earning a wage while learning but, crucially, he is getting the hands-on, industry experience he craves in a sector that not only interests him, but is one that he is passionate about.

“Since beginning my apprenticeship, I’ve developed a vast amount of skills, including bench fitting abilities, using CNC lathes to turn components and carrying out electrical discharge machining (EDM) practices, all of which require me to work to small tolerances of ±0.02 mm.

“Throughout my time here I feel I’ve done lots of things that contribute to the further success of the business.

“I’ve sparked new tooling inserts, collet grab ring inserts and made a variety of different electrodes for this process. I‘ve also used the Agie Charmilles EDM wire cutting machine a substantial amount; mainly for the manufacture of robotic grippers that hold plastic fittings in place while a robotic assembly line builds the fitting. These are being used in the assembly section at both the Broomhouse Lane and Neal Road Polypipe sites.”

Simon Golightly, factory manager at Mason Pinder, said that over the past three years Jordan has shown how adaptable he is and has progressed through each department with ease taking everything in his stride.

“No matter what department Jordan has experienced, he has glided through while still giving maximum effort,” said Golightly. “All of Jordan’s mentors speak highly of him and point out that he, along with other apprentices, are vital in the future of Polypipe.

“On his journey through Mason Pinder, Jordan has developed a varied skill level and demonstrates this on a daily basis. He has progressed to working on his own using his own initiative, he also understands that he is constantly learning and developing which is a fantastic attribute to have and allows more senior/experienced toolmakers to guide him when and where necessary.

“Jordan also has the added advantage of offering reverse mentoring to the senior engineers, offering new and innovative ideas on many projects that Mason Pinder encounters.

“He is a pleasure to have as part of the Mason Pinder team; he is helpful, polite and a vital part of Polypipe’s future.”