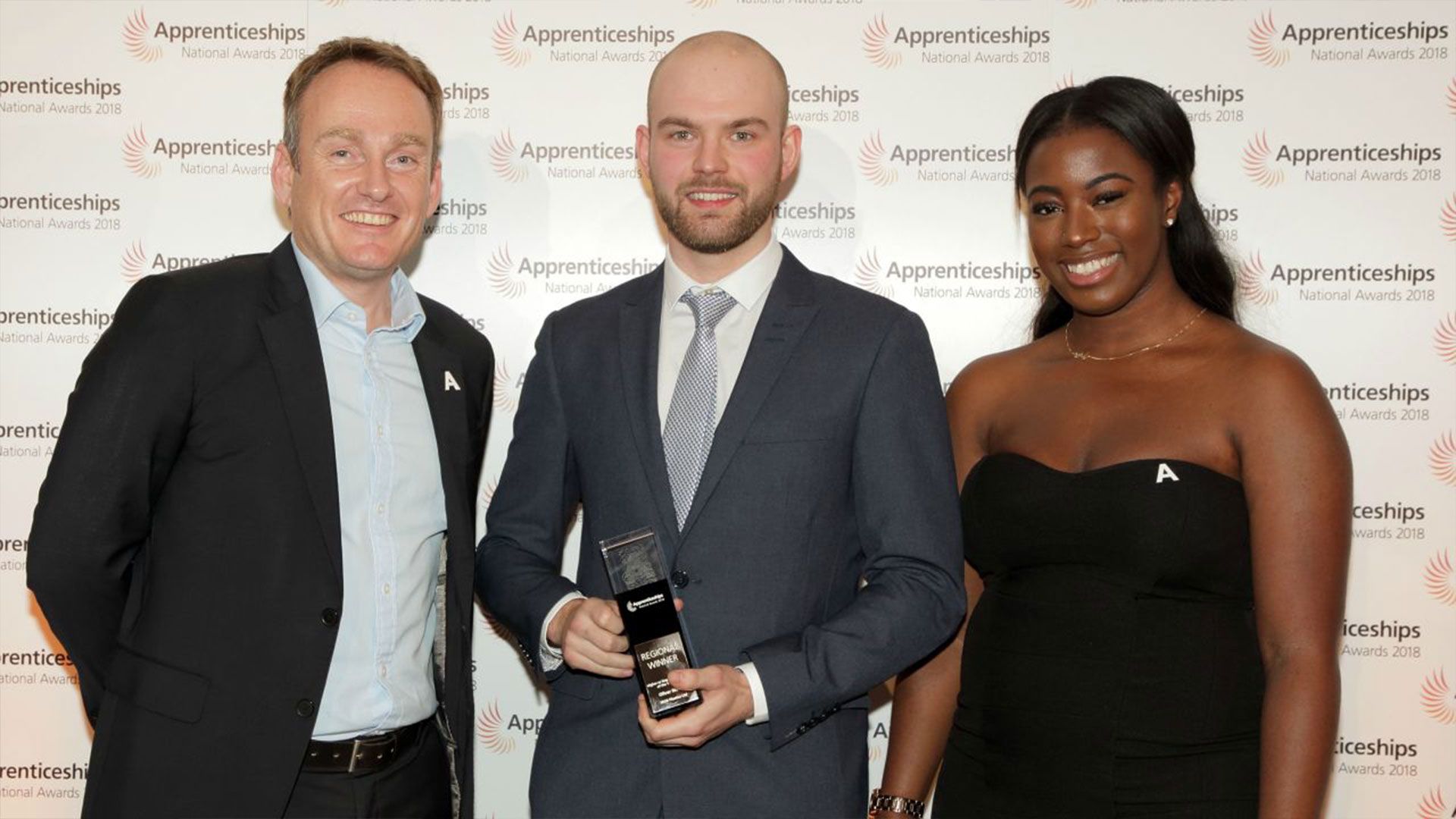 Oliver Marsh – a bass player in a rock band and process engineer with a gift for taking the waste out of wheelie bin production – has beaten off fierce competition to make it to the national finals of the Apprentice of the Year.

Twenty-two-year-old Oliver, an apprentice with OnePlastics Group, trained at the University of Sheffield AMRC Training Centre in both mechanical maintenance and manufacturing engineering. At a ceremony in Leeds he was awarded the higher and degree Apprentice of the Year for Yorkshire and the Humber earning a place in the final in London at the end of November.

“My apprenticeship has been life-changing,” says the quietly spoken Oliver. “Working with a company that really values and supports young trainees has enabled me to grow both as an engineer and as a person. My mentors at MGB have been fantastic, giving me the insights and tools to help make a difference to the production process. I would recommend the apprenticeship route to anyone: I decided not to go to university even after securing a place and that was definitely the right decision.“

Oliver works at OnePlastics’ state-of-the-art MGB Plastics factory in Rotherham and is no stranger to success having already scooped a major industry award for getting council crest plate changes down to 34 seconds from ten minutes, saving the company in excess of £137k-a-year in production process costs.

He is now part of a team appointed by the Managing Director to cut waste from the production line: MGB plastics are the UK’s largest manufacturer of local authority wheelie bins and invest heavily in modern equipment.

Ian Cosgrove, training advisor at OnePlastics, says Oliver is definitely a ‘rising star’ having won the British Plastics Federation Apprentice of the Year in 2017, and is delighted he has reached the regional finals of the national awards.

Ian heaped praised on the AMRC Training Centre’s commitment towards creating a pipeline into industry for future engineering and manufacturing talent.

“We are extremely fortunate in having such a well-equipped and professional training provider on its door step. Working closely with the AMRC Training Centre we developed Oliver’s higher-level program, integrating a polymer diploma to run alongside his mechanical qualification.

“It was refreshing to work with a team with such a ‘can do’ attitude, an attribute that is often lacking in training providers who push a ‘one size fits all’ philosophy.”

“At our Rotherham site, we mould more than 1.5 million units per year, and this figure is forecast to grow with the integration of cutting edge automation and technology.

“This business growth can only be achieved by engaging a highly effective multi-disciplined team of well-trained engineers and technicians. As we all know these people are extremely difficult to find. That is why OnePlastics has embraced the training levy programme and now has 18 apprentices, across a range of skills and ages, and we are committed to ‘growing our own’.”

When hitting the right notes for MGB, Oliver is a bass player in rock band Alba Rosa who recently headlined at the O2 academy 2 in Sheffield. “I love my music but being up on stage winning awards is a fantastic experience. I’m really looking forward to London next month. This past year has given me such a great platform from which to launch my career.”

Nikki Jones, director of the AMRC Training Centre, said Oliver is a very worthy finalist in the awards and a shining example of the success that can be achieved through apprenticeships.

“Oliver is one of our higher apprentices and an absolute credit to the AMRC Training Centre and to his company. During his apprenticeship, and beyond, he has displayed the right attitude, passion and commitment that companies are crying out for in manufacturing and engineering and being in the finals of the National Apprenticeship Awards 2018 is testament to that.”