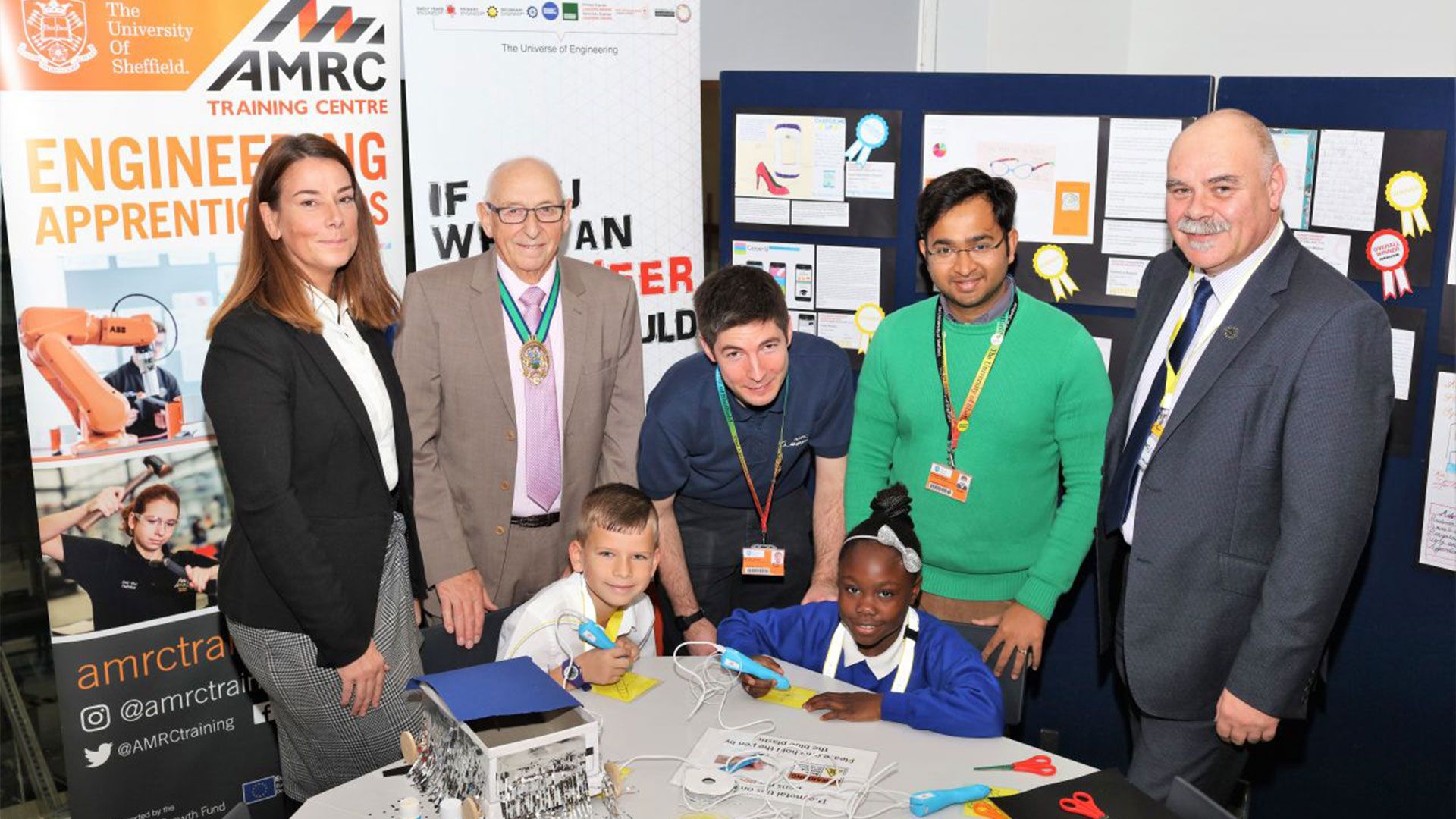 Pompoms, sequins and sticky back plastic aren’t your typical engineering tools but the AMRC Training Centre was awash with them for the launch of an exciting campaign to inspire young engineers of the future.

The University of Sheffield Advanced Manufacturing Research Centre (AMRC) has teamed up with Primary Engineer – a national not for profit organisation bridging the gap between industry and education - to develop engineering skills for teachers and inspire children to see themselves as the problem-solvers and innovators of the future by bringing engineering to life in classrooms across the Sheffield City Region.

In the inaugural year of the partnership schools from the city region are taking part in Primary Engineer and Secondary Engineer teacher training programmes where teachers are partnered by ‘classroom engineers’ from the AMRC and trained to deliver whole class engineering activity for pupils.

It was launched at the AMRC Training Centre by Deputy Lord Mayor of Sheffield Councillor Tony Downing, and children from Dinnington Community Primary kick-started the campaign – with the help of AMRC STEM Ambassador and Great British Bake Off winner Rahul Mandal - by using basic engineering skills to build and decorate shoebox cars.

Rahul, who became STEM Ambassador to help inspire the next generation of engineers, praised the partnership between the AMRC and Primary Engineer.

He said: “Programmes like this are incredibly important for empowering teachers with the right skills. They need to bring engineering to life in the classroom in a fun and creative way. We need to make a real impact on young minds to try and inspire more children in the Sheffield City Region to consider engineering as a cool career.

“I became a STEM Ambassador, to help inspire young kids to do science and engineering because I think there is a huge need for more engineers. If we want to inspire people, we need to do it from school age level.”

The scheme has received overwhelming support with Deputy Lord Mayor of Sheffield, Councillor Tony Downing, saying it was wonderful to see the children so enthused in getting to grips with engineering.

“We desperately need the engineers and skills to continue to excel to compete globally which is why I’m delighted to launch the Primary Engineer scheme here at the AMRC Training Centre,” he said.

“As we can see with this magnificent facility, advanced manufacturing is a major success, particularly in aerospace and automotive.

“There really never has been a better time to get into engineering technology and there has never been more opportunities. We need to provide industry with the talent it requires and provide young people with the brilliant careers they need.”

Councillor Jayne Dunn, Cabinet Member for Education and Skills at Sheffield City Council, said: “Programmes like this are so important in nurturing and developing the engineers of the future.

“The recent launches of Boeing and McLaren show the opportunities available for young people, male and female, in pursuing an exciting and challenging career in engineering and manufacturing. As a council we are committed to championing equality and diversity and events like this can only help us to achieve that.

“It is important that we ensure that young people across the region see the benefits of and are enthused about studying STEM subjects. They are hugely important for the whole of the Sheffield City Region as it helps drive forward economic growth.”

Rotherham Council’s Deputy Leader Councillor Gordon Watson, said: “This scheme inspires children to get involved in science and technology at an early age.

“It gives pupils the opportunity to try something new, get creative and develop their engineering skills in the classroom. The Advanced Manufacturing Research Centre also provides teachers with suitable resources and expertise to guide engineers of the future.”

Young people across the region will be designing the future of engineering through the Primary Engineer Programme “If you were an engineer, what would you do?” competition. This is open to all pupils from more than 600 schools across the Sheffield City Region. The pupils are asked to interview engineers, identify a real-world problem and design a solution to it. Pupils also write a letter to engineers saying why they should build it. Every pupil that submits an entry will have their design graded by an engineer and receive a certificate.

To spark pupils’ imagination, engineers from the AMRC will visit schools to talk about engineering and their role within it, they will also give examples of how engineers solve problems. Awards will be presented to the winners at an annual prize-giving event hosted by the AMRC followed by a public exhibition of entries from all participating schools. Staff and students from the AMRC will select and build a prototype of one or more of the shortlisted designs.

Shortlisted designs are judged by a panel of engineers and awards presented at an event hosted by AMRC followed by a public exhibition of entries from all participating schools. The AMRC will also make a prototype of one or more of the winning designs.

Dr. Susan Scurlock, CEO and Founder of Primary Engineer Programmes said: “Immersing children in the world of engineering shows them that anything is achievable and that they can be part of designing the future of engineering. Last year we engaged with over 56,000 school children to encourage them to consider a career in engineering. Partnering with an organisation such as the AMRC is key to achieving this in the Sheffield City Region and beyond”.

Nikki Jones, Director of the AMRC Training Centre, said: “Working in partnership with schools from across the Sheffield City Region not only helps raise the aspirations of our children by putting engineering at the heart of their learning, it shows them the possibilities of what they can achieve. It also cements our commitment to developing and nurturing the ambitions of future engineers that are needed in order to grow our economy on a local, regional and global scale.”