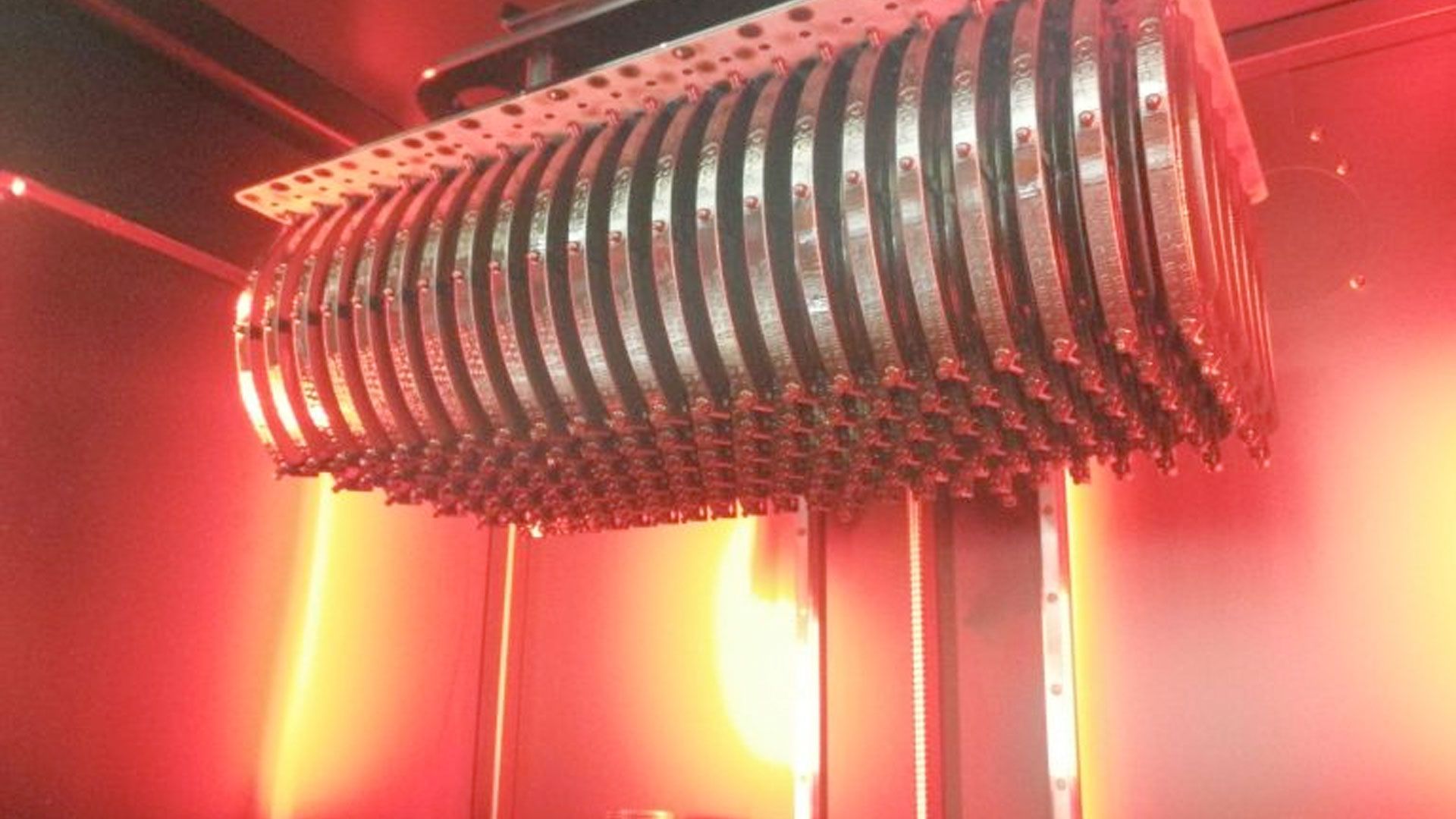 Read on to find out how Joe Palmer, the AMRC Training Centre Manufacturing Technology lecturer, is leading the AMRC response to a national call to produce PPE for front line workers.

Thousands of protective face visors to help keep Sheffield’s frontline NHS workers safe in the fight against Covid-19 are being made by a team at the University of Sheffield AMRC who are working around the clock to rapidly manufacture and assemble the essential face shields.

Engineers from the AMRC’s Design and Prototyping Group (DPG) have responded to the national call to produce more Personal Protective Equipment for healthcare workers by using technologies such as 3D printing and laser cutting to make up to 1,000 face visors per week.

The shop floor at the AMRC’s Design and Prototyping Testing Centre has been transformed into an assembly production line and the team worked tirelessly over the Easter weekend to deliver the first batch of 934 protective face shields to the Royal Hallamshire Hospital on Easter Monday. They plan to deliver an additional 1,000 visors to the Northern General Hospital by next week.

Joe Palmer, the Senior Design and Development Engineer who is leading the AMRC’s response, said the team has coordinated its efforts with Sheffield Teaching Hospitals NHS Foundation Trust to ensure visors are being delivered to the local hospitals with the greatest need.

He said: “We know these visors are needed now and not in a few weeks’ time, so we’re really pleased that we were able to get almost 1,000 out of the door by Monday and into the hands of the frontline NHS workers who so desperately need them in order to stay protected as they battle this deadly virus to save lives.

“When the visors were delivered to the medical stores department at the Hallamshire Hospital, everyone there was really appreciative and that was a real boost for our team.

“The AMRC is so grateful to those who have stepped up to help. It’s not just been technical staff from the design team - we’ve had everyone from receptionists, composites engineers and senior project managers volunteer to help with the assembly.

“The manufacture of these visors has required an enormous amount of effort from a great many people and I want to thank everyone involved. People have been working in shifts for the past 12 days, working over the Easter weekend and on Easter Monday to make sure we could get this crucial kit to healthcare workers. It certainly would not have been possible without such a great team.”

Craig Roberts, Head of the Design and Prototyping Group, said the team is doing ‘an exceptional job’ and that it had been very rewarding for the group to be part of the national Covid-19 response.

“My hat goes off to everyone involved,” said Craig. “The team has done a fantastic job and it’s very humbling to see how quickly, safely, and effectively the AMRC can rise to a challenge.”

The request for help to make face visors came less than a fortnight ago as demand for vital PPE kit for healthcare workers continued to grow nationwide.

Joe, who also teaches the next generation of engineers at the AMRC Training Centre, quickly pulled together a team to see how the AMRC could help meet the national need by using advanced manufacturing technologies such as 3D printing, also known as additive manufacture (AM).

But before they could fire up the printers and begin the rapid manufacture and assembly of face shields, they first had to choose a suitable design, carry out test prints, source material and transform the workshop into an assembly line - all while maintaining the necessary social distancing and personal hygiene measures for coronavirus, as well as the usual fire marshal and first aid cover.

Joe explained: “There has been a lot of activity going on behind the scenes to make this happen, with great support from the AMRC’s health and safety team to ensure all the correct guidelines were being met to keep staff safe.

“It’s not been as simple as print-and-go. A number of designs have been released freely on the internet and we tried a variety of different ones, eventually deciding on three which we can make quite quickly.

“Over the past week the focus has been on getting the materials together. The bottleneck has been getting hold of the clear film material for the actual visor, which is called PETG. There is very little material available for those who can manufacture in large volumes, organisations such as the AMRC.

“Fortunately we managed to source some of that visor material last Thursday which allowed us to start assembly at the weekend and we have some more due to arrive this week so we can continue with production to help other hospitals.”

As members of the High Value Manufacturing (HVM) Catapult, the AMRC and the Nuclear AMRC are playing a key part in the national response to Covid-19, helping Ventilator Challenge UK - an industrial consortium which includes Rolls-Royce, Airbus, BAE Systems, GKN, Siemens, Ford, McLaren, PCT and Renishaw - rise to the challenge of producing an additional 50,000 ventilators for the NHS, following a plea by Prime Minister Boris Johnson.

The consortium is focusing production on two existing ventilator designs which meet the high-level specification for a Rapidly Manufactured Ventilator System (RMVS) developed by clinicians and the Medicines and Healthcare products Regulatory Agency (MHRA).

Other work to aid the national response has seen the AMRC Machining Group making and proving out critical ventilator parts for the consortium and the AMRC’s immersive tech experts rapidly reconfigured dozens of Microsoft HoloLens’ to create and share training content to give assembly line operatives guided instructions in how to set up the new production processes needed to make the ventilators.